There are different ways of making decisions, from the automatic and habitual to the deliberate and planful. Both humans and animals are capable of taking actions deliberately, aimed at achieving particular goals. Such purposeful actions, or "plans" play a key role in decision making, but very little is known about the brain processes that support them. Recent advances in neuroscience, statistics and machine learning have made it possible to observe and manipulate planning processes "live" as subjects make decisions.

I believe that a better understanding of the neural basis of planning will ultimately advance our ability to treat decision-making disorders that are characterized by inappropriate, ineffective, or lacking plans, such as addiction and obsessive-compulsive disorder.

From a computational point of view, planning is a challenging and multifaceted problem. To predict the outcome of a particular course of action, it must rely in some way on knowledge about the world. What is the structure of this world model, and how is it learned? Once you have the model, when should you use it? When using it, how do you limit the number of options considered, as not to become "lost in thought" at the decision point? 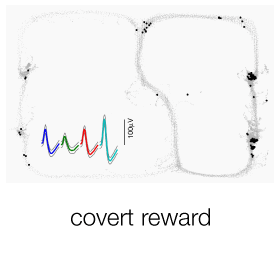 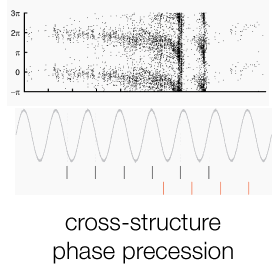 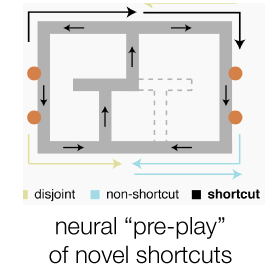 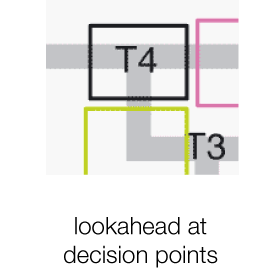 These are big questions that involve complex, distributed networks in the brain. By recording the activity of many individual neurons in multiple brain areas, in combination with modern analysis tools, progress can be made in restricted experimental settings. Click on the images above for some examples, done when I was a post-doc in A. David Redish's lab, in collaboration with several others; in particular, preplay shortcuts were discovered by Gupta et al., and lookahead at the decision point by Johnson and Redish.